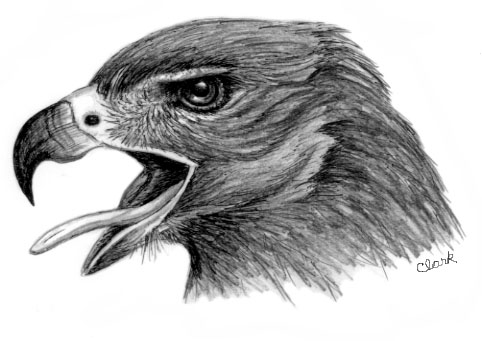 My friend told me that the reason why hawks make such loud screams and screeches when they fly is to scare prey out into the open so they can swoop down and capture them. Is this true?

But I have the feeling that you don’t have a friend who told you that hawks scream to scare up their food. If I’m wrong I apologize in advance, but this seems like one of those questions where the asker feels a bit awkward asking a question so they claim the information is really coming from someone else. You know, like the time I said to my parents, “A kid on the school bus said that eating paste will help keep my teeth white.” I really didn’t hear that on the bus but I didn’t want my parents to yell at me for eating paste or think I was a total idiot. My mother bought the whole thing and told me not to talk to the kids on the bus. My father on the other hand said, “Sure, eat all the paste you want. It will keep me from having to buy more Colgate.” Good ‘ol Dad was all about saving money.

Whatever the source of this question, Susan, I have to say eating paste makes more sense than a hawk screaming to scare up prey. Hunting is all about the element of surprise. The last thing a hunting hawk wants to do is call attention to itself.

Our old pal the Blue Jay seems to know how other birds will react when they hear a hawk. Jays are great imitators and will often give off a loud hawk call when approaching a bird feeder. Researchers aren’t sure why they do it, but one of the theories is that the jays trick the other birds into running for cover so they can have all the food for themselves. The people who complain that the noisy jays are scaring away all the “good birds” should know that the Jays also give hawk calls when they find a bird of prey. The thought here is that the brave jay is warning others of a present danger. Now who’s the good bird?

Hawks don’t scream to scare prey but to communicate with each other. They aren’t gifted singers like songbirds, so they scream. And why not, it works for rock stars. The most notable hawk screamer is the Red-tailed Hawk. Red-tails have such a classic scream that Hollywood uses the voice of the red-tail no matter which bird of prey they are showing on the screen. Whether it be an eagle, an owl or a Thunderbird, the movie makers almost always pipe-in the scream of the Red-tailed Hawk. And believe it or not, the red-tails rarely get paid for doing the voice-over.

Red-tails use their signature scream to defend their territory. They are often heard circling high overhead, blasting out a warning call for any other red-tails in the area. They also give their piercing scream when danger is approaching their nest, especially when the danger is the dreaded humans.

The other day a woman called me to report several hawks screaming around her yard. She was concerned that there was something wrong with them. I went over and was thrilled to discover that it was a family of Broad-winged Hawks. The newly fledged birds were chasing their parents around the neighborhood, screaming for food as they went. I don’t know if the young hawks ever got any food, but I sure did. The lady gave me a bag of fresh cucumbers from her garden. See, I knew this bird gig would pay off some day.

Just about all young raptors scream for food. If you are lucky enough to have insomnia, you can even hear baby owls shrieking late at night in hopes that the adult birds will stop by with a meal. One of the cutest cries comes from the baby Osprey. They not only cry out when they are hungry, but they also cry out when they are chilled and need to be brooded. They have a cry that says “Mommy, we’re cold, please come keep us warm.” Man, that was sappy, but it’s true.

For the most part birds of prey are silent when they are hunting. In fact, many owls have special feathers that muffle their wing beats to help make their flight silent. Many hawks sit quiet, high up on a perch, using their “hawk-eyes” to spot the slightest movement. Others fly silently near the ground or through the trees in hopes of surprising an unsuspecting meal.

Sorry I couldn’t back you/and or your friend up on this noisy hawk theory, Sue. Anytime I’ve seen hawks around my feeders the other birds freeze. They don’t flush out into the open. I’ve seen birds remain motionless for several minutes. They are clearly waiting for the danger to pass. Either that or they aren’t moving because they’ve been eating paste.